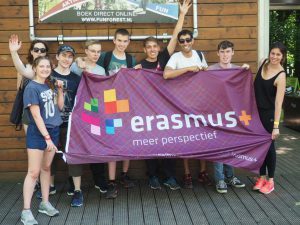 From the 3rd to the 5th of June, 9 of the people participating in the Gulden Leeuw Tall Ship Race from Lisboa to Cherbourg in August met in order to already prepare a few things of the trip. This meant that people from Ireland, the UK, Portugal, the Netherlands and – of course – Spain gathered in Amsterdam, going through the program of the trip, discussing possible sponsorships and the coverage in the media.

Climbing heights, scrubbing a ship clean, having a breakfast with traditional meals from each participating country on a ship – the Amsterdam prepare weekend for our sailing trip on the Gulden Leeuw got us quite in the sensation of what it would be like to be sailing on a ship!

To begin with – quite authentically – we got to know one of the duties onboard a ship, the so-called “Happy Hour”, which is not drinking cocktails, but rather cleaning the whole ship on the inside and the outside. We were staying this weekend on the Brandaris, the ship of the Windseeker organization is located in. 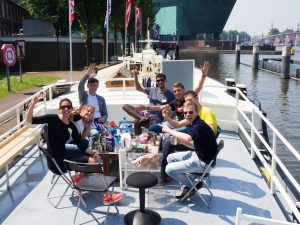 After eating dinner on Friday and getting to know each other a little bit more, on Saturday we were going through the program of the Tall Ship Race, and discussing how to sponsor the trip and to cover it in the media. In between, we were trying out the traditional meals the participants brought from their home country – like Hagelslag, Dutch chocolate streusel that you put on your bread – really tasty! On Sunday, instead, we got active, doing a climbing trip in a forest nearby Amsterdam. That’s just about it – the prepare weekend in Amsterdam!